The history of the Olympic Games

The Ancient Olympics: Spectators and Events

The history of Olympic Games 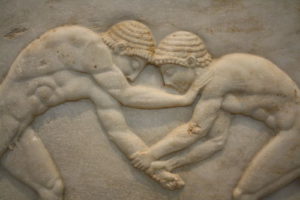 The first Olympic Games were organized in ancient Greece around 776 B.C. and were held with the utmost regularity every four years ever after for over 1000 years, devoted to Zeus, between August 6 and September 19.

The four years period in between two Olympic Games was called an Olympiad and was used as a meter of chronology.

The spirit of sport and friendly rivalry was the ideal of these Olympic games. The “Olympic truce”, that is the ceasing of fighting in the whole Greek world for as long as the Olympic games were on, was strictly observed with one or two excemptions.

The Spartans in 420 BC were excluded from the games on the ground of truce breaking.

In 426BC emperor Theodosius II ordered the destruction of the temples and the Altis was burnt.
Taking part in the Games was a great honor for the athlete and his native city.

The athletes were men of Greek origin that had not commited crime of sacrilege(had done something unholly).

The athletes competed in nude.Women were strickly forbiden to watch the games, with the excemption of the priestess of Demeter Chamyne. Violation of this rule was punishable by death.

According to Pausanias, the only time this rule was broken and the death sentence was not carried out, was the case of Kallipateira, daughter of the Rhodian Diagoras, who came to the stadium disguised as the trainer to encourage her son Peisidorus who was taking part in the games.

In her enthusiasm for his victory jumping over the trainers’ enclosure wall, her chiton fell down revealing her feminity.

The Hellanodikai, spared her life out of respect to her family, the Diagorides, who had three generations of Olympic winners: her father Diagoras, her brothers Eukleas and Kallianaktas and her son Peisidorus.

This incident was the reason for passing the law, which compelled the trainers to attend the stadium nakes, like the athletes..

Organization of the Games 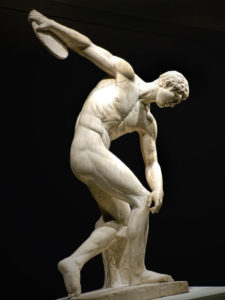 The highest dignitaries of the Games were the 12 Hellanodikai (umpires), responsible for organizing the games and application of the rules.

They had the authority to disqualify individuals because of violation of the rules and to impose fines and punish those concerned.

They were helped by the alytai( a kind of policemen), the mastigophoroi(whippers) and the ravdouchoi( staff bearers).

All of them answered to the alytarch(chief of police).

Being part of religious ceremonies, there were also, the theokoloi, who conducted the sacrifices, the spondoforoi, assigned to travel throughout the Greek world to announce the Games and the celebrations, the seers that gave prophecies and had special prestige, the priests for special sacrifices, the flute players, the dancers and the head of ceremonies.

Ten months before the begining of the Games, the Hellanodikai stayed in a special building where they were informed of their duties and learned the rules of the Games.

The athletes had to announce to them their participation one year before the Games began. One month before the Games they had to come to Olympia with their trainers in order to prepare themselves.

The Games lasted five days. During the first day the opening ceremony was carried out.

The athletes registered and in front of the Zeus Orkios, they and their tariners, took a vow(orkos). They vowed that “they compete fairly and without violating the rules”.

The Hellanodikai also took a vow to be honest and fair in their judgements.

The second day included horse and chariot races in the hippodrome and the pentathlon. The third day was the most important.

It included glorious rites devoted to the worship of Zeus in the morning.

There was a large festive procession of priests, athletes, the Hellanodikai, and notables of Ellis and of the other Greek cities.

In the afternoon the foot races were held. The fourth day the so called heavy events – wrestling, boxing, the pankration and the race in armor took place.

The fifth and last day the festive awarding of the prizes was carried out in front of the statue of Zeus.

The crowning of the winners took place amongst the applause, the hymns and songs of the friends and relatives and the celebrations would last until the next morning.

The Olympic winner received as a prize an olive tree crown as well as other important prizes in kind and money and the victory gave the athlete great fame during his lifetime and posthumously.

A victory ode was written especially for him as well as a statue of the athlete was made.

The statue portrayed the ideal of the “good and honest” man.

His native city participated in his victory and his proud fellow citizens knocked down part of the city walls through which he made his entry.

The foot – race is the oldest contest that took place in Olympia.

This distance gave its name to the area used for the performance of the event.

The stadiums, were situated on hillsides or in small valleys, thus enabling the spectators to follow the events.

Later and as the crowd of spectators grew, artificial slopes were built and the spectators sat on the ground. The stadium at Olympia had a capacity of 45,000 spectators.
There are no records of the achievements of the athletes during Archaic times as there were no means of the keeping of time.

The pentathlon was a combination of events. It included jumping, running, javelin, discus and wrestling.

The athlete had to combine many qualities and skills of the body.

Jumping Similar to the long jump.

The athlete jumped into a pit holding halters in his hands.
Discus An event loved by the Greeks most and known from Homeric poems.

A moment of discus throwing is captured in the famous statue of the Discus-thrower, opposite the Panathinaic Stadium, in Athens.
Javelin One of the favorite events of many mythical heroes. We find the “ekevolon” javelin throwing which was judged by the distance the javelin was thrown, and the “stohastikon” javelin throwing where the javelin was thrown at a specific target.
Wrestling It is refered to for the first time in Homer’s Labors for Patroclos. One of the pentathlon events but also independent in the Panhellenic games. Even today it is called Greek – Roman wrestling.
Boxing One of the oldest events, as shown by the early reference to the event by Homer and the representation of two children boxing on the mural from Akrotiri in Santorini. 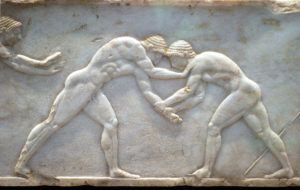 The Pangkration A combination of wrestling and boxing, it was considered as the most worthy event for men in the games.

The horse races Took place in the hippodrome, a space used for the horse races. The horse races comprised of various events and were conducted with horses, chariots and quadriga.The most spectacular event was the quadriga race, an event in which the most prominent historic personalities had competed. 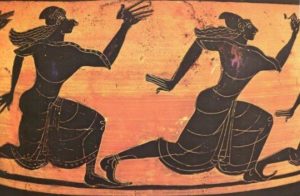 Independently of the Olympic games, THE HERAIA, foot races for women only in honor of Hera, were also taking place in Olympia. These games were also held every four years .

The women ran having their hair loose, dressed in short tunics. There is a perfect image at a statue in the Athens Archaeological museum of a girl taking part in the games.