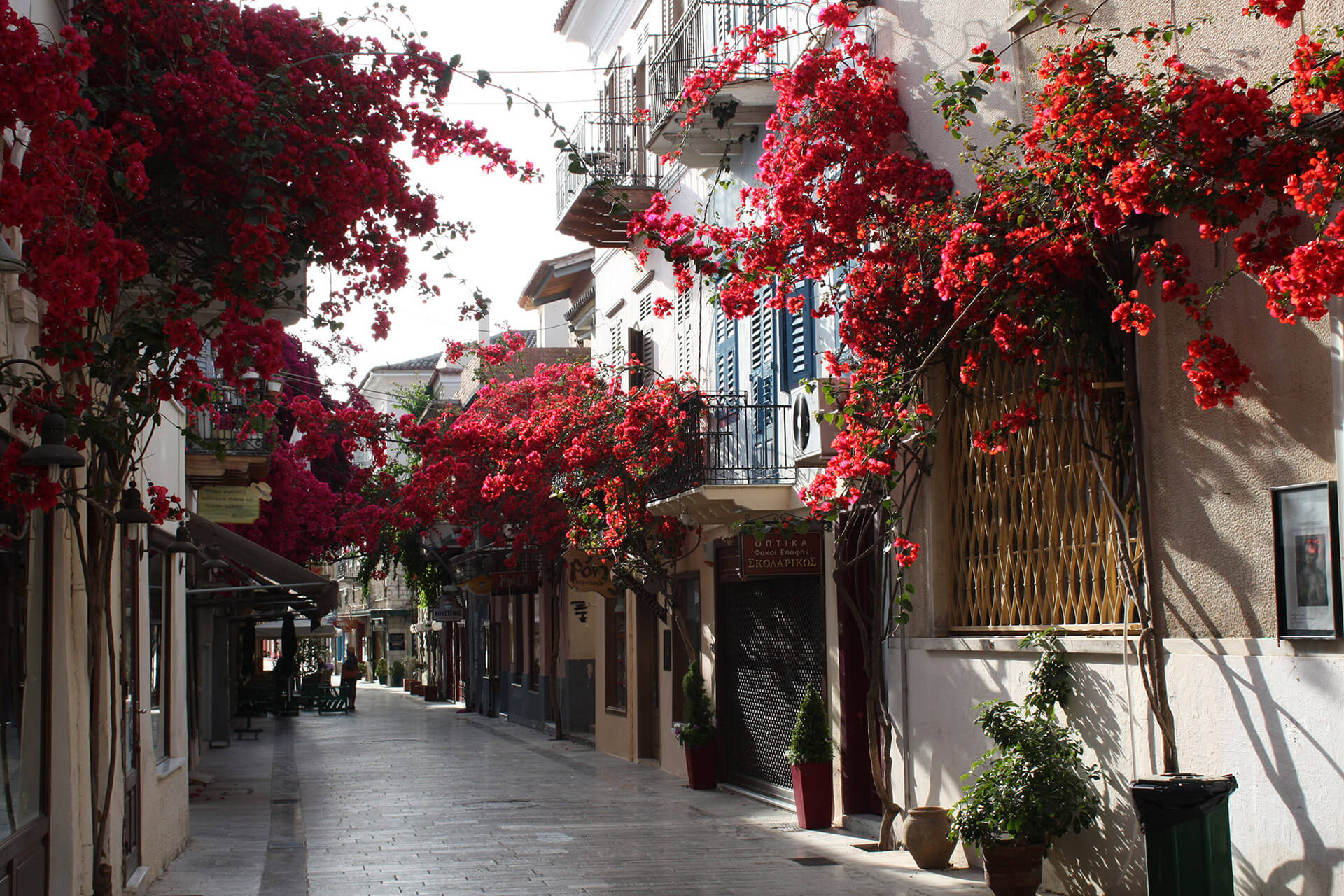 Operates between APRIL-OCTOBER every Monday.
Departs on Mondays 08:30, returns to Athens on Fridays at +/- 19:30
Free hotel pick-up/drop off service starts at 07:30. (See the link in the footer of this website)

PRICES: All travel agents, in Greece and worldwide, offer the same tour at different prices. We are sure that our prices for this tour is not matched by any other company. After 60 years organizing tours throughout Greece we have secured the best deals in all aspects of travel. So, why pay more? Our discounted prices, per adult, for this tour are:

Special discounts: (One option of 5% discount is applicable).
* Persuade a friend, share a triple room with your friend and save 5%
* Persuade your friends, make a team of 5 or more adults and save 5%
* Take advantage of our PAY IN ADVANCE 5% discount (see in the footer)
* Combine it with the 1 day cruise and pay a special price for the package.

NAFPLION – the “Venice” of Greece Modern architecture hasn’t spoiled the old town of Nafplion, which is a feast for the eye. Nafplion was the capital of the Greek state before Athens in the early 1830s. Here was the first residential palace for the young Bavarian Prince, Otto, the first king of the new country after the liberation from the Turks. The old town is beautiful, with old mansions and paved roads. The town’s fortresses, the Palamidi and the Akronafplia, played a key role during the war of independence. Frankish, Venetian and Turkish conquerors left their signature in the town and strongly influenced its culture, architecture and traditions during the years of occupation. Ancient walls, medieval castles, monuments and statues, Ottoman fountains and Venetian or neoclassical buildings attract the visitor with their unique architecture and beauty.

MYCENAE – “City in gold” Mycenae, the city that controlled both the land and sea routes, was the kingdom of mythic Agamemnon. Myths related to history have inspired poets and writers over the centuries from Homer and the Greek tragedies of the classical period to contemporary literary and artistic creations. The site was uncovered in 1874 by Heinrich Schlieman, who also excavated the site of Troy. You enter the citadel through the impressive Lions’ Gate.

OLYMPIA & the OLYMPIC GAMES The site of Olympia was the location of the ancient Olympic Games, with the first recorded win in 776 BC. In addition to the numerous temples and sanctuaries, there are remains of sporting structures, such as the ancient Stadium, the Gymnasium, the Palaestra and others.

DELPHI – The famous “temple bank”. The pan-Hellenic sanctuary of Delphi, location of the oracle of Apollo, was the spiritual centre of the Greek world. Situated in a spectacular natural setting on the mountain of Parnassus, it was the symbol of Greek cultural unity from the 8th century BC onwards.

Driving from Delphi to Athens you stop at Arachova for a short stop and arrive in Athens at +/- 19:30


– These tours are organized by 3 Tour Operators. All the Travel Agents sell the same tours at discounted rates.
– Start the communication, and choose the travel agent that sounds honest and suits your budget.

* Read the 4 steps 2 book that you find in the footer and we look forward to receive your request.
* When we receive the message from the bank that the money have been deposited, we’ll send you the voucher.

MAP – ROUTE OF THE TOUR

In the footer of this website you find the “4 steps to make a booking”. If our offer looks interesting, please send us the booking form.

CLICK here and see ALL THE GUIDED TOURS that start from Athens. Detailed information on each tour is included.