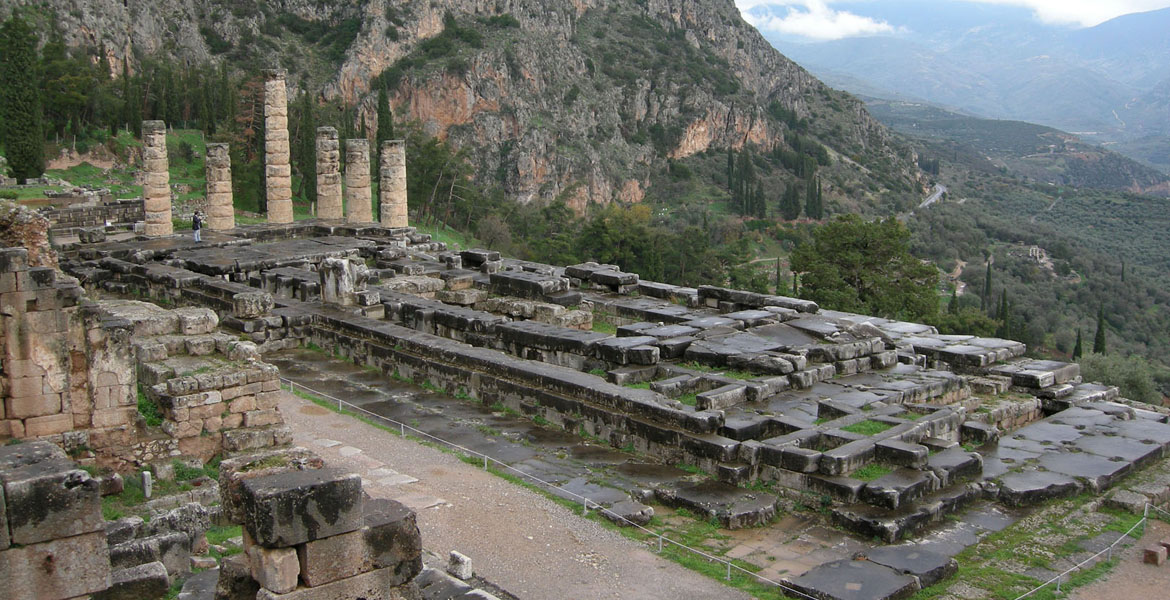 h3>DELPHI – the centre of the universe

The prices quoted in the above price list, are in euro, per person, and include:
– transportation on modern air-conditioned buses
– Pick up / drop off from your hotel or near your hotel (See the list at the footer of the website)
– Services of the professional tour guide.

– Lunch and entrance tickets are optional and depend on the price that you decide to pay.

This ONE DAY DELPHI TOUR can also be organized as a private tour (cost shared between the passengers):
Transportation of 1-4 passengers = 260.00 euro. 5-8 passengers the extra cost is extra 10.00 euro per person.
In this private tour a) entrance fees, lunch, and drinks are not included in the price, and
b) a local professional tour guide, can be arranged to meet you in Delphi at the extra cost.

Please, read the rules on HOW TO BOOK AND SECURE a booking that you find in the footer.
When we receive the message that the money have been deposited, we shall send you the voucher.
There is a cancellation deadline if the bookings are not paid on time.

The history of Delphi


If there is a site to visit in Greece then Delphi is this place. The sheer magnificence and grandeur of the location strikes you. God Apollo had chosen the best spot to build his temple. Below the site, a valley ringed by mountains, provides breathtaking views from any location within the site.

According to the myth, Zeus released two eagles. The one flew east and the other one flew west. They both met over Delphi, determining that the centre of the world was there. A temple dedicated to god Apollo was built there in the 7th c BC. The Temple of Apollo housed the great Oracle of Delphi, the world’s greatest source of income for a thousand years. The oracle of Apollo became a religious centre where common people and kings alike, came to consult “Pythia”, the priestess of the sanctuary. In a room, below the Pythia stood the priests, and interpreted her vague and wild cries, and put them into ordered language.

Above the entrance to the temple it reads ‘Know Thyself’ and ‘Nothing in Excess’. These sayings were read and pondered upon by all of the great kings, warriors and noblemen who came here for advice. The true wisdom of the Oracle lies not within the words of the Oracle’s priestess, but within the walls of the temple itself.

The site & the museum


Delphi was the most sacred place in the ancient world and thousands of pilgrims visited here, from kings and philosophers to common people to hear the prophesies of the Oracle and to watch and compete in the ancient games held here, the Pythian Games, similar to the Olympics.
The archaeological site is one of the best in Greece with ancient temples and shrines placed on the side of Mt Parnassus, makes Delphi one of the best places to visit all year round. The site consists of the temple of Apollo, the treasury houses of the City States, the ancient theatre, and the stadium at the top of the hill.
The ancient site, bellow the road, where the temple of Athena Pronaia, the Tholos (a circular structure with 3 of its original 20 doric columns restored), the gymnasium and the sports fascilities, used for training for the athletes that took part in the “Pythian or Delphian Games”, is not visited in the guided tour. You can choose the tour without lunch and visit them on your own, without the tour guide.
.

Today, next to the archaeological site, there is an impressive museum, displaying findings from the local excavations, that started 1892, masterpieces of Ancient Greek sculpture. The highlights are offerings by the oracle visitors, such as the famous bronze statue of the Charioteer, the statue of Antinoos, the famous athlete Aghias, the two “kouros” statues, the Roman “omphalos”, being the sculptured stone that represented the navel of the world, and many others.

When you finish with the sightseeing, you proceed to a local restaurant for lunch (optional), and after lunch the driver stops for 40 minutes at the nearby traditional village of Arachova. The bus arrives in the centre of Athens at +/- 18.30.