The rock of Monemvasia

The rock of Monemvasia

By Olympia Tours Peloponesse , Special Tours castle, castle or the rock of Monemvasia, Gibraltar of Greece, Monemvasia No Comments

The rock of Monemvasia or Gibraltar of Greece 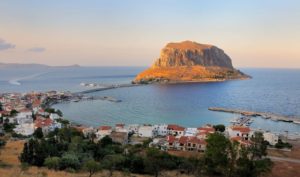 The island of Monemvasia, known as the “Gibraltar of Greece,” is a massive rock rising from the sea and connected to the mainland by a causeway.

The medieval town of Monemvasia dominated by a protective fortress can be reached only through a tunnel; Its name, comes from the words moni, meaning “single,” and emvasi, meaning “entry.” It is truly an amazing sight.

As you approach from over the hills you are hit with the image of an enormous rock in the sea, connected to the land by a narrow bridge.

From the land it looks like just a mountain and if you look more closely you may see a tiny church perched on the top.

However if you cross the bridge and walk around the side of the mountain you will suddenly come to a wall stretching from the sea to the mountain.

Behind the wall is an ancient town protected from all sides by sea, wall and mountain.

Explore the narrow, cobbled streets of this charming town, which was the commercial center of Byzantine Morea in the 13th century.

2000 years ago people built up a town at the top of a 300 meter rock to be protected from the barbarians.

The Rock was separated from the mainland by an earthquake in 337 AD and today the Monemvasia rock with its castle is actually an island accessible only through an entrance which many years ago used to be a portable, wooden bridge.

This causeway links Peloponessus with the Rock of Monemvasia.

The settlement is divided into two sections, built at different levels, each with a separate fortification.

They built their town on top of the cliff (300m), and it was named upper town.

Then they built a neighborhood close to the sea also protected from walls which was named lower town.

The castle fall to the Franks after 3 years of surrounding in 1249 but they gave it back to the Byzantines in 1262 after the battle in Pelagonia. The Byzantines kept it until 1460. Those two centuries where the golden ages for Monemvasia.

The people of Monemvasia where very wealthy at that time due to the extensive trading, the privileges they had from the emperors of Costantinople (Istanbul), and due to the fleet they owned.

When Greece was occupied from the Ottomans (Turks) the Monemvasians preferred to pass their town to the Venetians and that was the first occupation by the Venetians, 1464-1550. During that period the Venetians transplanted the wine Malvasia in Crete, Italy and Malta where you may find this kind of wine with small variations.

The castle passed later to the hands of the Turks. A small period of Venetian occupation followed again 1690-1715 and finally Monemvasia was liberated in 1823 during the Greek revolution.

Remains of numerous Byzantine and post-Byzantine buildings are preserved in the area of the Upper Town which is not inhabited today.

The first building when you enter Lower Monemvasia is a house of Greek poet and writer Yannis Ritsos (1909 – 1990). He was born in Monemvasia in the noble family of landowners. His grave is not far from this house.

What to see and do

What to see and do

After breakfast, walk up to the church on the edge of the cliff atop Monemvasia castle and try your hand at throwing a small iron or steel metal object to the sea (it will be drawn in towards the side of the hill, never reaching the sea, due to a magnetic field emanating from the rocks below).

Beaches: To the north and south of Monemvasia there are beaches 2-3 km from the causeway at Gefyra. Some well liked beaches slightly further away are at Plytra (20 km) and the stretch from Viglafia to Neapoli (35 km) both of which on the west side of the peninsula, across from Monemvasia. The island of Elafonisi has some of the more scenic beaches.

Archaeology: The Richia Museum of Folklore: Richia, about 25 km from Monemvasia in a building of 1875, which was the first school in the village. With farm tools, spinning wheels, clothing and woven items.

Monastery of the Annunciation of the Virgin and Agios Georgios of Gerakas near Gerakas village, founded in 19th century.

There are many caves within easy reach:  Kastania – at Kastania Voion (south of Monemvasia near Neapolis).

Vri Cave is north of Monemvasia with a precipice which you can climb down. You can find the entrance on the south west side and there is a lake below with crystal clear water.

21 km farther a very neat place to visit is Porto Geraka, a small village which landscape reminds small Fiord of the south.

Where to eat & drink – Monemvasia

If want to stay close, choose one of the four tavernas in Monemvasia. Inside the castle there is the Cafe Angelo which is at night a bar and in the morning breakfast is served, with the sound of classic music and a wonderful view. There are also two cafes to enjoy your coffee.

The tavernas on the seafront, over the causeway, at Gefyra, offer good food at good prices. A little further in the new town of Monemvasia you must taste the octopus fried with Ouzo. As there is just one “main” street – only about 200 metres long – you will find the shops, cafes and restaurants in one stroll through the castle.


See the video on Monemvasia


Most of Monemvasia’s residents today live by the port (Gefyra), which is a modern town with supermarkets, travel agency, bus connections and other services. The Rock is about 2 km from the modern port of Monemvasia, about a 20-minute walk or a few minutes by car. Cars aren’t allowed inside the walls of the old town and the parking is outside of the fortifications.

Most of the old town’s buildings are made from stone, and many have been renovated as summer homes for Greeks and foreigners. It’s a sunny town of tiled-roof houses, attractive shops and cafes, pleasant squares, and churches. 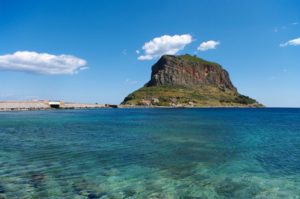 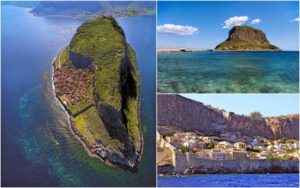