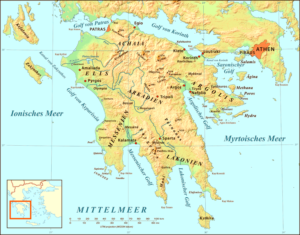 The Peloponesse, Greece’s southern peninsula, is rich in history.

You can start with the ancient sites of Corinth, Epidaurus and Mycenae, all easily reached from Nafplion.

Further south, you can explore the medieval Byzantine city of Mystras near Sparta on the slopes of Mt Taygetos, with its winding paths and stairways leading to deserted palaces and fresco-adorned churches and the area of Mani, a region of bleak mountains and barren landscapes broken only by imposing stone towers, mostly abandoned but still standing sentinel over the region.

Other attractions in the Peloponesse include the beautiful medieval castle island of Monemvasia, the Ancient Olympia, birthplace of the Olympic Games, and the thrilling Diakofto-Kalavryta, rack-and-pinion railway, which roller coasts its way through the deep Vouraikos river Gorge.