Nowhere in the world there is a site that has more relevance on today’s world than Olympia.

Olympia is still in our lives with the lighting of the flame and the torch relay, ceremonies that every year will bring back memories of this tour.

Despite the damage by the earthquakes and the floods, the site is worth your visit. The setting is magical, making it the most beautiful major site in the Peloponnese. Both, the archaeological museum and the museum of the ancient Games are among the finest in Greece, making your visit to Olympia a must. There is no modern equivalent for ancient Olympia – a religious and at the same time an athletic centre. Men travelled from every part of the ancient World to compete in these Games and the winners became legends. Over 50,000 spectators came to watch the Games every four years and support the athletes.
The area was buried under the alluvial deposits of the two rivers until its discovery in 1852. Since then, millions of people visit Olympia every year and admire its wealth and importance in antiquity. A visit to the original site of the Olympic Games is a moving experience. Running in the original stadium is an unforgettable one.
If your visit to Greece is short and does not allow you to join a longer tour, take our ONE DAY TOUR TO OLYMPIA and visit the huge, but walkable, sacred ancient site.

Ancient Olympia has cultivated ideals. The importance of taking part in the Olympics was a great honour, being an Olympic winner was even greater.
The ancient Greeks visited the sanctuary of Olympia every 4 years. Join one of our tours and visit it once in your lifetime.

The history of Olympia

In the beautiful valley of the river Alpheios, in the Peloponnese, lies the most celebrated sanctuary of ancient Greece. Dedicated to Zeus, the father of the gods, it sprawls over the southwest foot of Mount Kronion, at the confluence of the Alpheios and the Kladeos rivers, in a lush, green landscape.

Olympia became the most important religious and athletic centre in Greece.

Its fame rests upon the Olympic Games, which was held every four years to honour Zeus. The origin of the cult and of the festival went back many centuries. Local myths concerning the famous King Pelops, and the river Alpheios, betray the close ties between the sanctuary and both the East and West.

The earliest finds at Olympia are on the foot of Mt Kronio, where the first sanctuaries and prehistoric cults were established. A large number of pottery sherds of the Final Neolithic period (4000 BC) were found on the north bank of the stadium. Traces of occupation of the three periods of the Bronze Age were identified in the greater area of the Altis. A great tumulus of the Early Helladic II period (2800-2300 BC) was discovered in the lower strata of the Pelopion, while several apsidal structures belong to the Early Helladic III period (2150-2000 BC).

It is believed that in 1200 BC the region of Olympia was settled by Aetolians under the leadership of Oxylos, who founded the state of Elis. The first sanctuary dedicated to local and Pan-Hellenic deities was established towards the end of the Mycenaean period. The Altis, the sacred enclosure with its shady oaks, planes, pines, poplars and olive-trees, was first formed during the 10th and 9th c.BC, when the cult of Zeus was probably established. Olympia was subsequently devoted exclusively to worship and for many centuries had no other structures except for the Altis, a walled precinct containing sacrificial altars and the tumulus of the Pelopion. The numerous votive offerings, mostly figurines, bronze cauldrons and tripods were placed outdoors, on trees and altars. The first figurines representing Zeus, the master of the sanctuary, date to the Geometric period.

In 776 BC, Iphitos, king of Elis, Kleosthenes of Pisa and Lykourgos of Sparta reorganized the Olympic Games in honour of Zeus and instituted the sacred ekecheiria, or truce. Soon the quadrennial festival acquired a national character. The great development of the sanctuary began in the Archaic period as shown by the thousands of votive offerings – weapons, figurines, cauldrons etc – dating from this period. This is when the first monumental buildings were constructed – the temple of Hera, the Prytaneion, the Bouleuterion, the treasuries and the first stadium.

The sanctuary continued to flourish into the Classical period, when the enormous temple of Zeus (470-456 BC) and several other buildings (baths, stoas, treasuries, ancillary buildings) were erected, and the stadium moved to the east of its Archaic predecessors, outside the Altis. The countless statues and precious offerings of this period were unfortunately lost, as the sanctuary was pillaged several times in antiquity and especially under Roman rule. In the Hellenistic period the construction of lay buildings, such as the gymnasium and palaestra, continued, while in Roman times several existing buildings were refurbished and new ones built, including hot baths, luxurious mansions and an aqueduct. Many of the sanctuary’s treasures were removed and used for the decoration of Roman villas.

The sanctuary continued to function during the first years of Christian rule under Constantine the Great. The last Olympic Games were held in 393 AD, before an edict of Theodosius I prohibited all pagan festivals. In 426 BC Theodosius II ordered the destruction of the sanctuary. In the mid-fifth century AD a small settlement developed over the ancient ruins and the Workshop of Pheidias was transformed into a Christian church. In 522 and 551 the ruins were devastated anew by earthquakes, the Temple of Zeus being partially buried. In subsequent centuries the Alpheios and the Kladeos overflowed and together with landslips from Mount Kronios buried the site deep in mud and sand. Olympia remained forgotten under a layer of debris 5-7 metres deep. The area was dubbed Antilalos and it is not until 1766 that the ancient sanctuary was re-discovered.

The archaeological site of Olympia 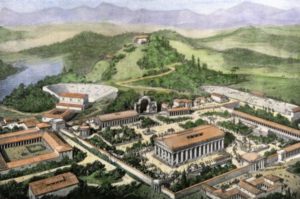 The archaeological site of Olympia includes the sanctuary of Zeus and the many buildings erected around it, such as athletic premises used for the preparation and celebration of the Olympic Games, administrative buildings and other lay buildings and monuments. The Altis, the sacred enclosure and core of the sanctuary, with its temples, cult buildings and treasuries, occupies the centre of the site. It is surrounded by a peribolos, or enclosure wall, which in the late fourth century BC had three gates on its west side and two on the south, and is bordered on the east by the Echo Stoa, which separates the sacred precinct from the stadium. The enclosure wall was extended in Roman times and two monumental entrances were created on its west side.

The Classical Temple of Zeus and the earlier Temple of Hera dominate the Altis. East of the Heraion is the Metro?n, a temple dedicated to Cybele, the mother of the gods, and behind this, on the foot of Mount Kronios, a row of treasuries dedicated by Greek cities and colonies. To their west lies the Nymphaion, a splendid fountain dedicated by Herodes Atticus. South of the Heraion and over the remains of the prehistoric settlement of Olympia is the Pelopion, a funerary monument commemorating the hero Pelops. Also within the Altis are the Prytaneion, the see of the sanctuary officials, and the Philippeion, an elegant circular building dedicated by Philip II, king of Macedon. Southeast of the Heraion was the great altar of Zeus, a most important monument entirely made of ashes and therefore now completely lost. The remaining space inside the Altis was filled with numerous altars and statues of gods, heroes and Olympic winners dedicated by Greek cities or wealthy individuals, such as the Nike of Paionios.

Outside the sacred precinct of the Altis, to its south, are the Voulefterion and the South Stoa, the southernmost building of the greater sanctuary and its main entrance from the south. West of the Altis and separated from it by the Sacred Road is a series of buildings for the sanctuary personnel, the athletes and the distinguished visitors: the gymnasium and palaestra, exercise grounds, the Workshop of Pheidias which in Late Antiquity was transformed into a Christian church, the Greek baths with their swimming pool, the Roman hot baths, the Theokoleion or priests’ residence, the Leonidaion or officials’ quarters, and the Roman hostels.

East of the Altis lies the stadium where the Olympic Games were held. The stadium of Olympia, where the ancient Olympic Games were held, and the massive temple of Zeus, are some of the attractions of the site. The best way to get the most out of your visit is to actually race in the stadium like the athletes used to do and feel the vibes!
South of the stadium was the hippodrome, of which no trace remains as it was swept away by the Alpheios river. South of the hippodrome is a group of mansions and baths, including the famous House of Nero, built by the emperor for his stay at Olympia during his participation in the games.

In the video Prof. Hale speaks about the sanctuary and the history of Olympia, a place that is still in our lives.

Olympia cannot be visited as a day trip organized on a tour bus. It is outside the mileage and working hours of a bus driver and the only way to visit it in a day trip is by hiring a self-driven car or a taxi, or by taking our private day trip, preferably with the extra expense of a local guide.
There are a lot of amusing myths and interesting stories about ancient Olympia and the Olympic Games that the tour guide will talk about.

Tours from Athens to ancient Olympia, a place that should be included in everybody’s itinerary.