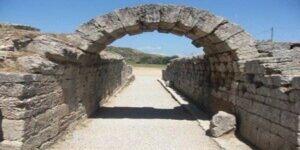 There is no other ancient site that has more relevance to today’s world than ancient Olympia.

Olympia is in our still lives with the lighting of the flame and the torch relay, ceremonies that every year bring back nice memories.

– A visit to the original site is a moving experience while running in the original stadium is an unforgettable experience.
– The archaeological museum and the museum of the ancient Games are among the finest in Greece, making your visit to Olympia a must.
– Exhibiting findings from the area in the museum make Olympia one of the most interesting and educational sites in Greece.
– The general setting at Olympia is magical. The whole region is filled with history and beauty.
– There is no modern equivalent for ancient Olympia – a religious and at the same time an athletic center.

Ancient Olympia cultivated ideals. The ancient Greeks visited the sanctuary of Olympia every 4 years.
The importance of taking part in the Olympics was a great honor, being an Olympic winner was even greater.
Over 50,000 spectators traveled from every part of the ancient World to compete in these Games and the winners became legends.
It is not difficult to imagine the atmosphere during the Ancient Olympic Games so many years ago.

A major earthquake during the 6th c. AD resulted in serious damage and flooded the whole site.
The area was buried under the alluvial deposits of two nearby rivers until its re-discovery in 1852.
Despite the damage by the earthquakes and the floods, the site is well worth your visit.
Almost 2 million people visit Olympia every year and admire its wealth and importance in antiquity.

Join one of the following tours and visit Olympia at least once in your lifetime.
If your visit to Greece is short and does not allow you to join a longer tour, choose the ONE DAY TOUR TO OLYMPIA and visit Olympia.

CLICK and see ALL THE TOURS that are organized from Athens.

SEND your questions and bookings to bookings@astoriatravel.gr

In the video of the Great Courses, Prof. John Hale speaks about the sanctuary and the history of Olympia, a place that must be included in everybody’s itinerary.

Olympia cannot be visited from Athens as a day trip organized on a tour bus. It is outside the mileage permitted and working hours of a bus driver and the only way to visit is by hiring a car or a taxi, or by joining our 1-day tour to Olympia, preferably with the extra expense for a local guide.
There are a lot of amusing myths and interesting stories about ancient Olympia and the Olympic Games that the tour guide will talk about.